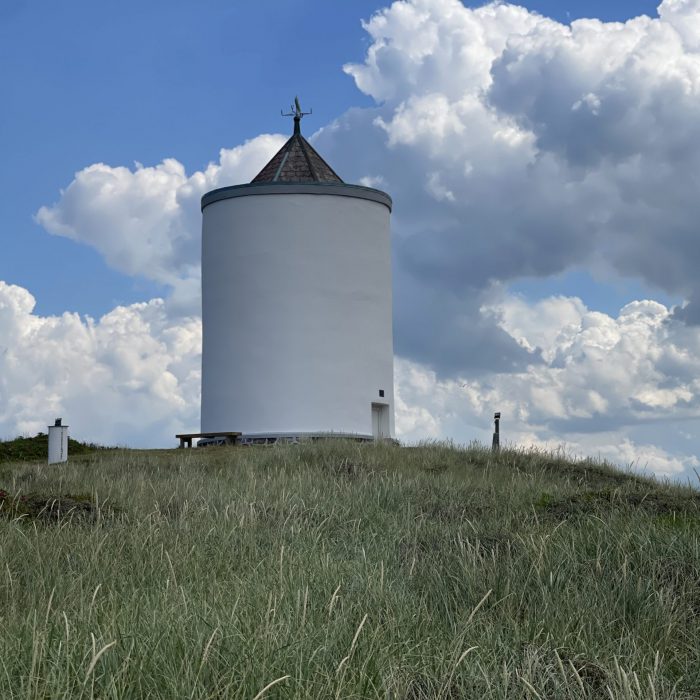 Vandtårnet was built in 1916. The tower is  beautyfull like a king’s throne over the city centre. With a very beautiful forged fish on top. The water supply was led out from Åsendrup via pumps, where you could keep an eye on the water level via a zinc plate on the tower,  and thus know when to pump water again. Today it simply function as a landmark, and has been reproduced countless times in the artists’ productions.

Watch the video about Vandtårnet here 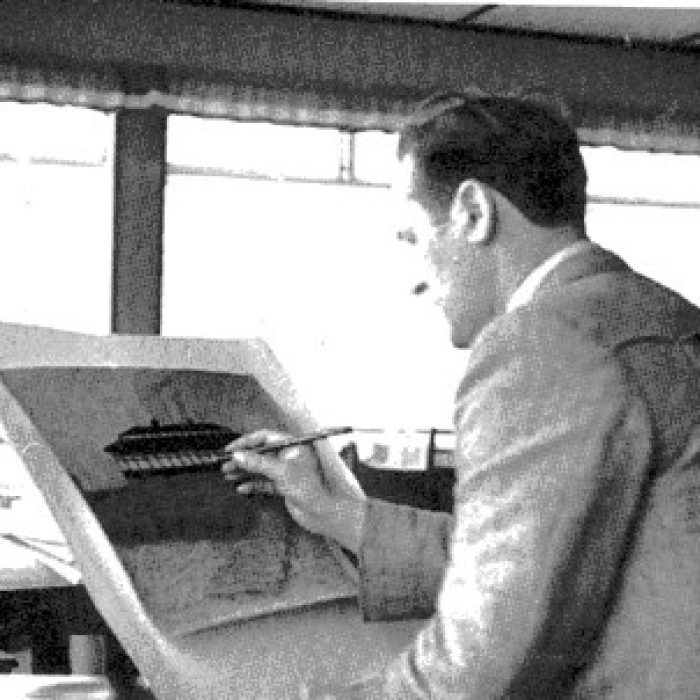 Lars Nielsen was born and raised in  a poorhouse in Sindal on 24 October 1893. He died in 1965 and is buried at Hirtshals Cemetery. Lars Nielsen started drawing very early age. He drew what he saw, whether it was a tree, the animals or a person from, for example, the poorhouse, which he caricatured with a loving hand.  Lars Nielsen studied painting but did not complete the training.  He was drawn to travel in Vendsyssel and make his many drawings in both chalk, charcoal, pencil and watercolours. These are usually people in a special form;  a slightly square and simple line.

Lars Nielsen has drawn and painted many portraits.  Something he was particularly firm about. Numerous pictures from the sea, Børglum monastery or a field with a few workers adorn the walls of the homes on the West Coast of Jutland. He lived in several places in the smaller towns in North Jutland and became popular regardless of whether it was Hirtshals, Tornby or Løkken.  There are numerous works by Lars Nielsen on the walls of Hirtshal’s inn, where he was a regular guest for many years. 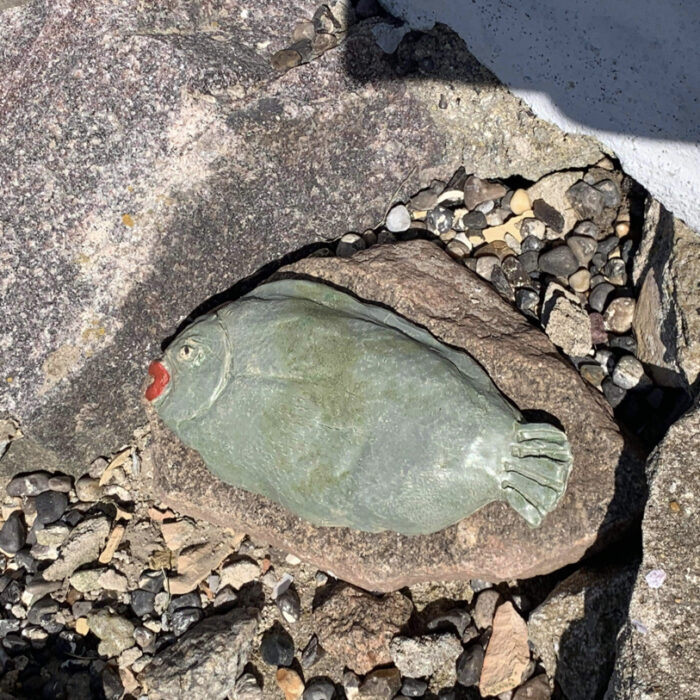 Art in the area around Vandtårnet

Lise Vestergaard’s work “How much space does a human being need” interprets the UN’s World Goal 11.
Knud Holst’s poem “the wall of the sea” is just behind Hotel Klitbakken.
John Kristensen’s  mural on Lars Nielsen’s path.
Lars Nielsen Path sign by Sanne Nørskov.
Lone Ejstrup Jensen and Trine Reinfjell et al have fish in ceramics in the area.
A  sculpture in bronze adorns the front of the tower. This was made by artist Bodil Dam in 2004 and shows a group of people standing on a plate, which was inspired by a fragment of an old Viking compass. The solstice column shows where the sun sets at the summer and winter solstice.Here, the town gathers around an event at each solstice. Bodil Dam is also the artist behind the bronze art at Lilletorv. 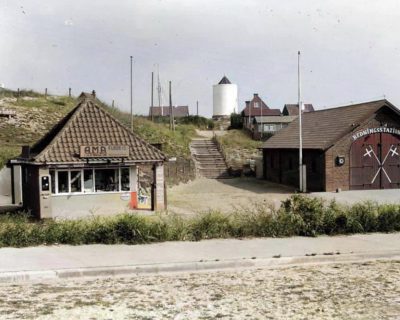 The ice house was originally built by Mason Peter Ingvardsen. Note the stairs up towards the water tower and the Rescue House, when it was on Sdr. Strandvej The rescue house was later converted into the Rainbow Art Exhibition and later the legendary host Peter Baadsmand, who had a bar that was an old fishing cutter. The fishing cutter is still there, but the building has now been converted into a shop and food house “Huset Havs.” The current Rescue House at Nordre Strandvej is the 4th of its kind and was built in 1936. 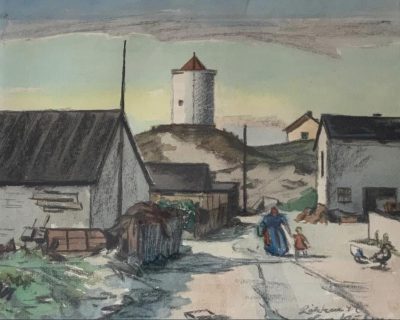 Lars Nielsen has created this beautiful motif from the entrance to “Julles sti”, at the end of Anton Bast Vej. The house on the left at the bottom was the house that Tjek Jerne lived in when she lived in Løkken. Note that there were no rose hips then. 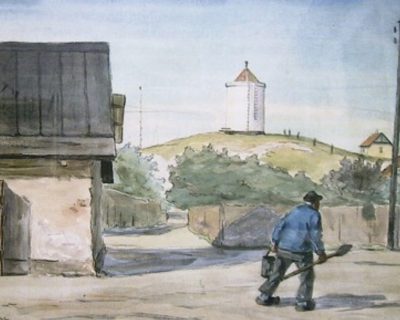 Old painting from the area with a view up Vandtårnsvej. The painting was made by Lars Nielsen, and depicts a worker in a slightly square and characteristic style. Today there is a wall here, which is decorated in several places. Among other things with the poem “Havets mur” by Knud Holst. 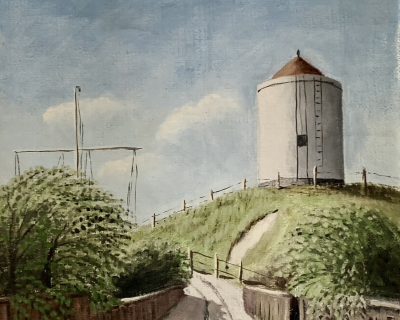 Painting by Julle, showing the Water Tower and the Signal Mast in their old location. Even then there was an alternative path up to the Water Tower. From up here you could enjoy the good view towards Børglum Kloster and Børglum Mølle. The fish on the roof of the Water Tower has not yet been painted. It first came into existence in 1953.

Photograph of Vandtårnsvej with a small green house that once was. This motif and this road, like Asylvej and Vittrupsvej, have been reproduced by many artists. 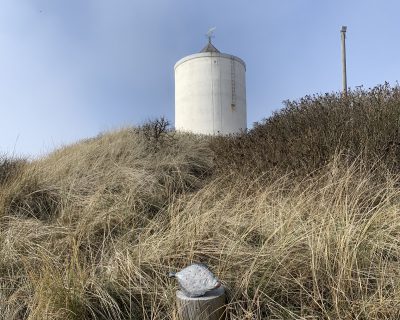 In the area there are numerous ceramics and fiber cement works. For many years there has been a bench at the foot of the Water Tower. Here you can have a little rest while enjoying the tranquility and the view of the oldest house in Løkken; Mikkel’s house. You can also see the solstice column of Bodil Dam and the beautiful view in all directions.