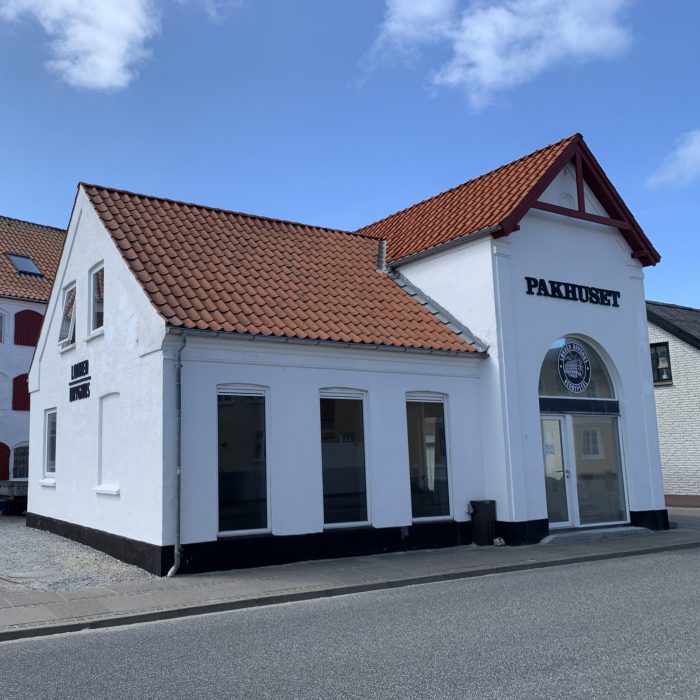 Pakhuset was built in 1862 by merchant Jens Peter Larsen. He was called the butter seller. In Smørkrämmeren’s warehouse, butter, grain and other goods were stored for sale, for shipping especially to Norway. Today there are apartments and a beer brewery.

On Kjelgaard square behind, there has been a fish factory and in Asylgade close by, there was for many years a poor house. Asylvej has been a busy thoroughfare, and many of the artists have often used this very motif, with the beautiful warehouse gable in the background, in their drawings and paintings.

Watch the video about Pakhuset here 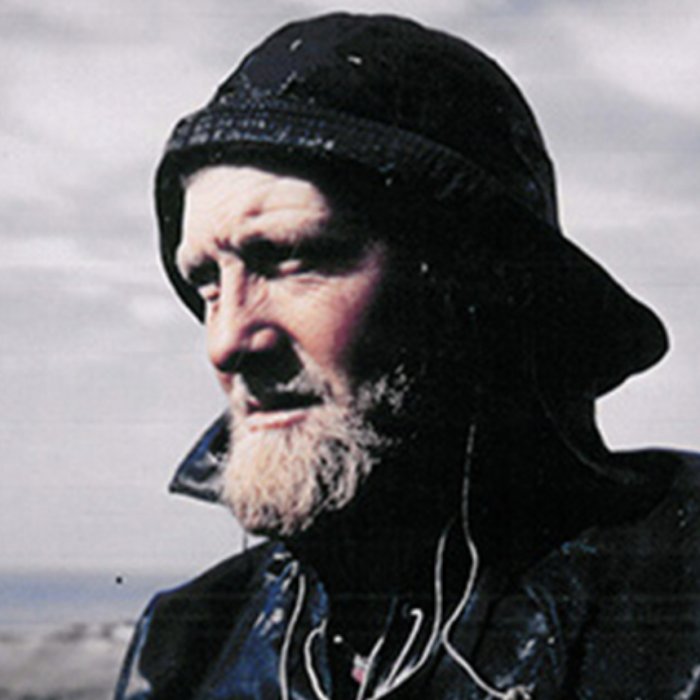 Julius Jensen with the signature “Julle” was born in Løkken on 27 July 1905 and died in 1975 after having lived in Løkken all his life. He is one of the fishermen who has also painted based on Løkken.

Julle lived in several places, including on Søndergade. He was self-taught, and clearly inspired in his works by his profession, as a fisherman.

He paints exclusively in oil colors and usually in very light, romantic and delicate tones. Motifs from the idyllic environment around the landmarks, quite often the fishing boats and the beach and especially the water tower, are what he paints the most. There are very rarely people in his pictures, but instead almost always, a red or green wheelbarrow. Julle has been extremely productive and was very accurate in his renderings. He has sold a great many pictures and the works adorn many walls here in Vendsyssel. 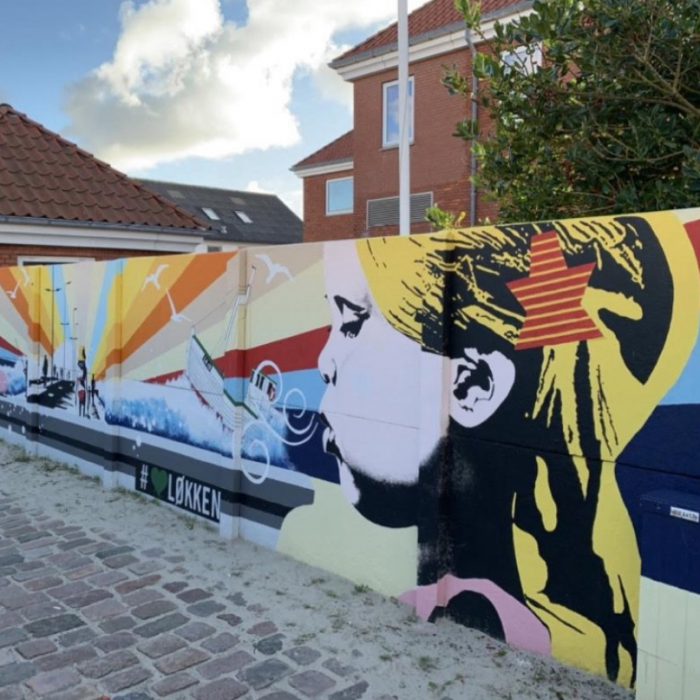 Art in the area around Pakhuset

John Kristensen, painter and gallery owner at Asylvej, has previously decorated a few walls in the city. One on Nordre Strandvej and one by his gallery and now also a few on the secret paths i.a. Check out Iron’s path. John Kristensen’s painting style seems to reproduce exactly how things look. He prefers to paint the sea and fishing boats, but also landmarks and views and often quite romantic pictures and always with the special light in focus.
John Kristensen paints the scenarios when he sees them unfold before his eyes and likes to wait for completion until the day those wheels have the special light as when he started the painting. John Kristensen has made a series in which he has painted Rubjerg Knude Lighthouse once a year. This collection is exhibited in his gallery. Lise Vestergaard’s work Feed one if possible then a hundred” on Asylvej, interprets the UN’s World Goal No. 2. “Stop Hunger” very appropriately on the former asylum house.
Lise Vestergaard’s work “Blown Away” from 2019 performed in connection with the Løkken Art Festival. Vintage fish in metal at Jens Bang’s path. You will also find stones, fish in fiber cement, various ceramics and signs. 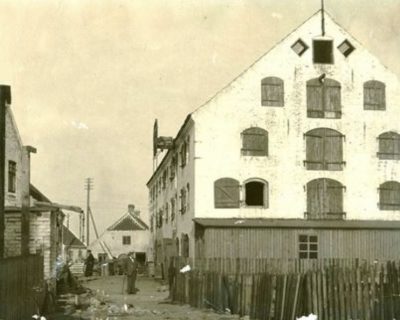 The people who sold from the ships were called gun dealers. One of them was Jens Peter Larsen, the butter seller, who in 1865 built a large warehouse that could hold 50,000 barrels of grain. Here you can see the gable of the warehouse from Asylgade. 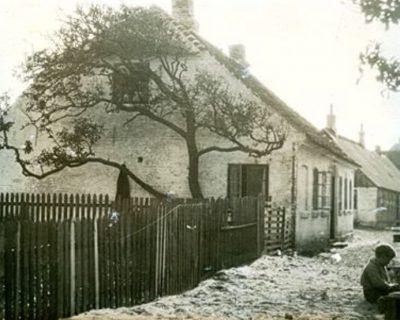 Asylvej to the west, shows the poor house with a child playing on the cobbled path. Fattigkassen were the owners from 1888 and rebuilt the house for two single mothers. Even then, the window was boarded up. Now the window is decorated with a mural with world goal no. 2 “Stop hunger”. From around 1860, the house was an inn. 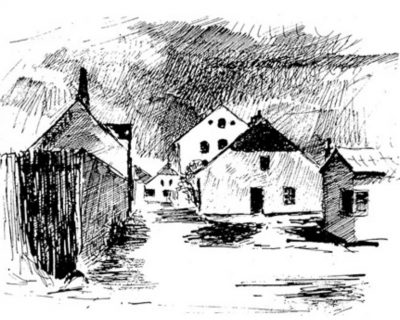 Asylvej with a look up from the gable of the Pakhuset, drawn in Anders Norre’s characteristic black marker line. 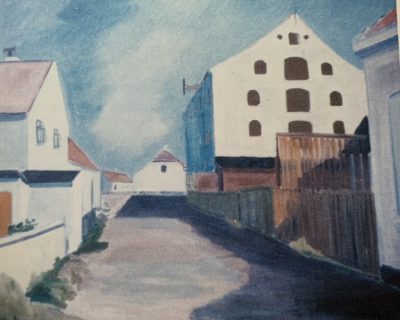 Asylvej with the characteristic gable. It is precisely this angle that has been used most often when the place has been depicted in paintings over time. The oil painting was painted by Knut Dokker in 1938. He was one of the other Løkken artists who have had their time in the city. Note again the window on the right. 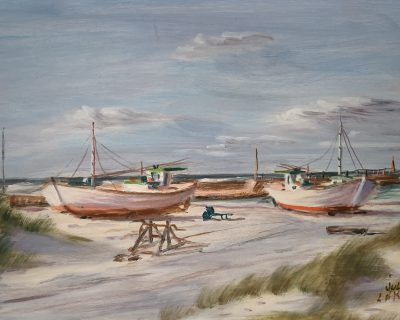 Oil painting of the Molelejet and the fishing place with the characteristic light romantic touches and fishing gear depicted. That’s how you know it’s a “Christmas”. Julle has been happy with motifs of the fishing boats, the Vandtårnet and the Rubjerg Knude. Always with a red or green wooden wheelbarrow or a winch. Julles Sti is also precisely at the foot of the Water Tower. 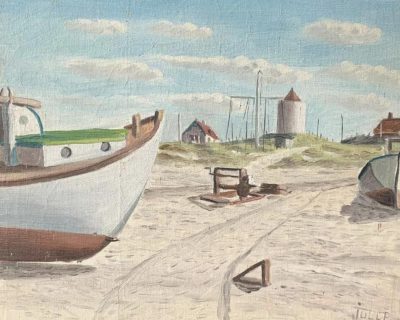 The fisherman and self-taught painter, Julius Jensen (Julle), has painted many poetic motifs of the landmarks and fishing. Here you can see the Water Tower with the then location of the Signal Mast and a winch. One of the types can be studied up close at Tjærepladsen. Note the low dune landscape.